58% of Brits polled, who expressed a preference, want a carbon Net Zero referendum, according to a YouGov/CAR26.Org survey. 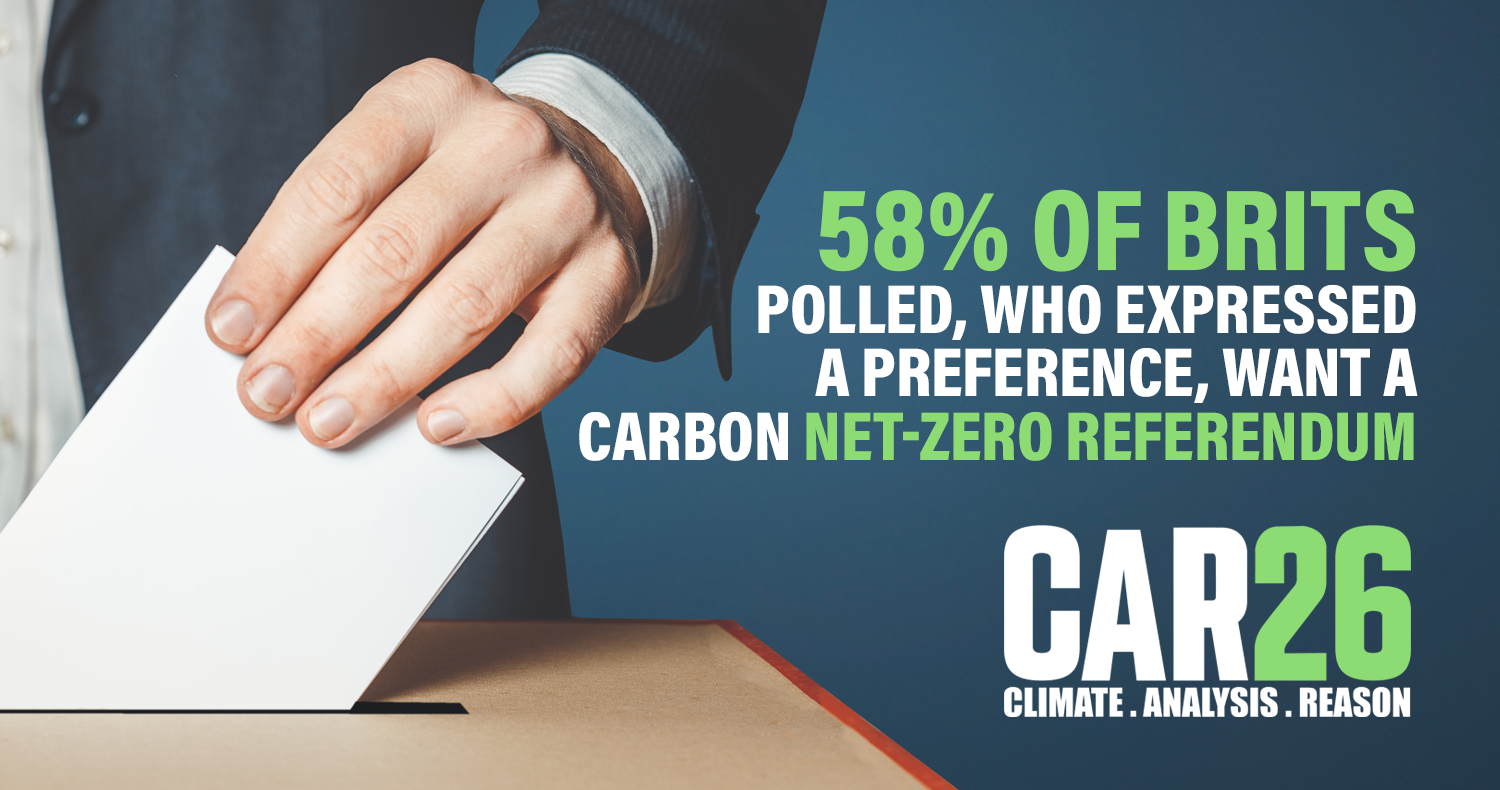 Only 30% Against A Carbon Net-Zero Referendum

58% of Brits polled, who expressed a preference, want a carbon Net Zero referendum, according to a YouGov/CAR26.Org survey.

YouGov/CAR26.org asked: ‘To what extent do you support or oppose holding a national referendum to decide whether or not the UK pursues a Net Zero Carbon policy?’

From a sample of 1,648 adults surveyed between 22nd and 24th October 2021 weighted for demographics, then broken down by political allegiance, EU referendum voting, gender, age, social grade and region, 28% did not know whether they wanted a referendum on Carbon Net-Zero.

Only 30% of Brits surveyed did not want a referendum. This is made up of 15% being strongly opposed and 15% tending to oppose.

Meanwhile, 42% stated that they supported a carbon Net Zero Referendum. 20% of whom strongly supported and 22% tended to support a referendum. Of those that expressed a preference, over 50% want a referendum in every single category of those polled – including young people, Remainers and Londoners.

This follows calls from the Daily Telegraph last week publishing the first call for a referendum on Net-Zero. They said: “The green challenge is too important, its implications too dramatic, to be left to an establishment that has embraced net-zero as if it were a new religion.”

CAR26.Org launched Tues, 26th Oct 2021 in advance of the COP26 United Nations Climate Change Conference, which commences on the 31st October 2021 from Glasgow.

According to CAR26.Org director, Lois Perry: “A majority of those expressing an opinion supported holding a referendum – greater than the winning sides in either the Scottish Independence or Brexit referendums.”

CAR26.Org believes that with greater transparency and objectivity on the science and costs, support for the Referendum would be even greater.

Miss Perry, says: “We must not let political consensus drive us into carbon poverty. Let the people take control of the wheel.”

“This poll reveals an arrogant remote elite charging ahead in pursuit of costly and futile carbon policy without looking over their shoulders at everyday Brits paying the price.”

According to the Institute for Fiscal Studies, the costs of Net Zero are more than £1,000 billion.

Miss Perry continues: “Support for a carbon Net Zero referendum is across the board in every category, and relative support of the ‘Red Wall’ North region for a referendum was the highest at 66% (excluding Don’t Knows).”

“There is serious doubt that CO2 has a significant negative impact on the climate, and the annual increase in Chinese emissions equals the UK total.”

“If CO2 is not the ‘climate control knob’ then far cheaper measures can handle weather events and slow long term climate change.”

“With so much fiscally at stake, the poorest will be hit the hardest,” she says.

“The Government has a duty to come clean about the pros and cons and the likely costs.  We demand to be fully informed and then to have our say.”

“Until then we demand a pause in their War on CO2 and that citizens can choose to opt out of misguided carbon costs and taxes,” she says.

The Tony Blair Institute for Global Change quoted a May 2021 survey from the UK Government Department for Business Energy & Industrial Strategy which found that only a tiny 14% knew ‘a lot’ or even ‘a fair amount’ about Net-Zero.

Notes to Editors:- All figures, unless otherwise stated, are from YouGov Plc. Total sample size was 1,648 adults. Fieldwork was undertaken between 22nd – 24th October 2021. The survey was carried out online. The figures have been weighted and are representative of all GB adults (aged 18+).

I would like to say thanks for standing up for us

Hi David, to sign the petition just fill in the form on the homepage. Thanks for your support.